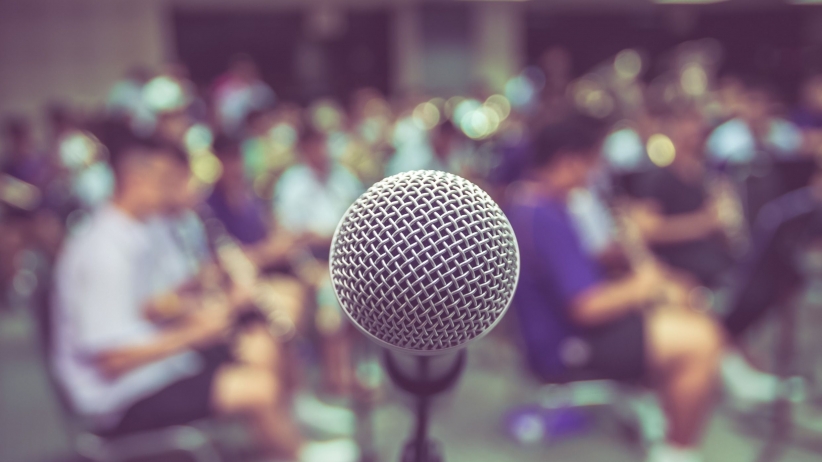 Kokocki is now international president of the communications and leadership organization, which operates more than 1,500 clubs in 135 countries. As the 27 Venture finalists prepare for their high stakes pitch in front of the judges, during 2016’s Final in New York City, Kokocki shared with The Venture 10 public speaking tips that you can apply to anything from a wedding toast, to an elevator pitch.

Get there early. You don’t want to be blindsided by the size of a venue or a crowd right before you give a speech. By arriving before you’re scheduled to speak, you’ll have time to get used to your surroundings and, if you’re speaking from a stage, get a feel for the space. If you can, try introducing yourself to a few audience members. Having some allies in the crowd can only make things easier.

No funny business. It’s common for speakers to start out with a joke, but Kokocki discourages it unless the joke serves a specific purpose. If someone is already nervous about giving a speech and then their opening joke falls flat, it could spell bad news for the rest of their performance. Kokocki also warns against starting with an apology. Don’t set the tone by telling the audience that you didn’t have enough time to prepare or that you’re not a good public speaker.

Land your message. “The goal of communication is to land a message,” Kokocki said. When it comes to public speaking, flawless delivery feels great, but your content, and the substance behind it, is most critical.

Know precisely what you want to say, but not precisely how you want to say it. Don’t plan to read or memorize a speech unless you need to be absolutely precise when it comes to your wording. Rather, Kokocki said, you should view a speech more like a conversation. Know the points you want to hit, but don’t get hung up on the specific words you want to use.

Tell stories. This is one thing most great speakers have in common. “They’ve perfected their stories, and they tell them in a way that people will remember them and repeat them,” Kokocki said. Don’t just use a story for the sake of it, though. They should always help make your point. Story, point, story, point, story, point is a formula that works for some speakers.

Minimize distractions. Avoid pauses such as “Um,” “Ugh,” “You know?” and other verbal tics that can take an audience’s focus away from your message. Kokocki has noticed that some people, in trying to prove a point, end up starting a lot of sentences with “So…” Very few speeches are going to be absolutely perfect, but they can almost all be made more effective by limiting distractions.

Be yourself. It’s totally normal to make a mistake as you’re speaking, but don’t let it throw you off. If something comes out a little funny, don’t be afraid to laugh along with your audience. In fact, the odd mistake here or there can come across more favorably than a flawless, but robotic, speech. “Just be human,” Kokocki said. “People respect that and like humility.”

Ask for feedback. This may go without saying, but if you know in advance that you’ll be speaking in front of a group, be sure to practice. It might be hard to find a test audience for some of your more mundane work presentations, but if possible, perform your speech for friends and family, and ask for their feedback. If you’re planning to use this speech more than once, like you would an elevator pitch, pay close attention to the responses you get. You might be able to glean some insights on what works and what doesn’t.

Learn from great speakers. When watching particularly engaging speakers, pay attention to their speaking style in addition to the message. Try figuring out what makes them so impactful, and see what you can learn from it. Don’t mimic them, though. Authenticity goes a long way.

First published by Chivas The Venture on http://www.chivas.com/en-gb/the-venture.